The True Cost of Pollution

The True Cost of Pollution

Cutting carbon pollution and creating jobs in the clean energy economy go hand in hand. The most effective way to stoke innovation and growth is to make sure everyone is following the rules. Big oil and coal companies are not paying the true cost of dumping millions of tons of carbon into our atmosphere. Instead, it’s regular people like us who incur the cost -- medical bills and sick days from asthma and lung diseases, fighting record-breaking wildfires, and severe drought causing our food prices to rise -- it’s in the billions of dollars.

This week, in a packed Oregon House public hearing on effective ways to limit pollution and put a price on carbon, allies spoke up: from rural communities to cities, businesses and workers, communities of color leaders and environmental advocates all testified that a price on pollution will benefit Oregon. 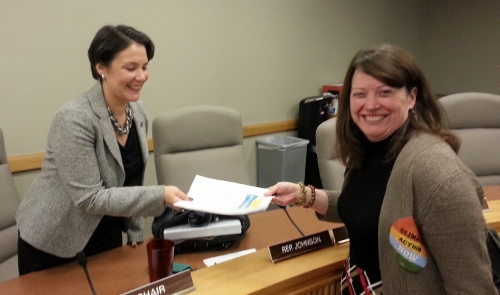 We presented, to the chairwoman herself, more than 1,700 petitions signed by Oregonians calling for a price on carbon. Passionate people responded in only one week to show this is a solution we need urgently!

HB 3470, The Climate Stability and Justice Act makes Oregon’s carbon reduction goals enforceable and requires the state to “identify and make recommendations on emissions reduction measures, alternative compliance mechanisms, and market-based compliance mechanisms that sources may use to maximize feasible and cost-effective reductions of greenhouse gas emissions…” and to put in place a plan by 2018.

HB 3252, A fee, invest, and equity approach that would place a fee of $60/ton on carbon emissions. It directs revenue to a) creating a jobs, economic development and transition assistance fund, b) creating assistance for low- and moderate-income households, and c) directs Highway Transportation-restricted funds to be used for eligible low-carbon projects, such as expanding capacity for high capacity transit.

HB 3250, A cap-and-dividend bill that places legal limits on climate pollution, auctions permits, and returns all revenue in equal payments back to taxpayers and their dependents.

To provide real world examples of the success of systems that put a price on carbon pollution, experts from California and British Columbia spoke to the representatives considering the legislation.

California has had a comprehensive climate law since 2006 and a cap-and-trade program in place since the beginning of 2013. During the first two years of cap and trade, the state’s economy has thrived with jobs in California growing by 3.3 percent last year, outpacing the rest of the nation.

British Columbia has had a carbon tax since 2008 and has experienced a slightly higher GDP than the rest of Canada while reducing pollution and cutting personal and corporate income taxes.

Key to the success of any statewide policy that seeks to cap emissions and put a price on carbon is economic viability and fairness. Low-income Oregonians should not suffer by any changes in the energy market and a good policy will be an economic driver for clean energy and related industries.

If energy companies are forced to pay full price for dirty, polluting power, we can encourage further investment in solar, wind, and biofuels. We can grow middle class jobs and protect public health. A price on carbon will incentivize more of what we do want – conservation and renewables - and discourages what we don’t want – fossil fuels and pollution.